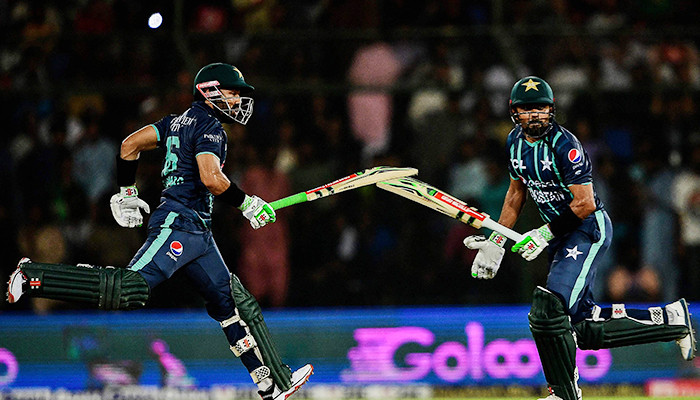 
KARACHI: Pakistan will look to break the seven-match series tie against England when Babar Azam’s men take the field in the third match at the National Stadium today (Friday) at 7:30 pm.

On Thursday, Babar scored an unbeaten century with Mohammad Rizwan (88) to level the series at 1-1. Pakistan’s first victory in a home series.

England are visiting Pakistan for the first time after 17 years Won the first match of the series. After the man-in-green’s poor performance with both bat and ball.

However, in the second match, the opening pair’s unbeaten 203-run partnership boosted the confidence of the green shirts – as they completed the 200-run chase in 19.3 overs.

‘Blind trust in each other’

Speaking after the second T20I of Geo segment of “Game Changer”, Rizwan said that he has a very good understanding with Babar.

“We trust each other blindly, we support each other and have great communication which is helping us.” Rizwan said about his partnership with the captain.

Talking about the partnership record with Babar, Rizwan said that there can be no greater honor for him than if his numbers carry the name of Pakistan.

The opening pair has recently been criticized by some for not delivering enough but Thursday’s innings seemed to answer all the critics.

England captain Moeen Ali said his one over against Pakistan was off-spin bowling.Gambling“Which didn’t pay off after the visitors lost the second match.

“When I bowled my over, the momentum changed. It really gave them confidence and after that, they were almost unstoppable,” Moeen said.

“I felt it was under control for most of it. I genuinely feel my over lost the game for us. It was a gamble on my part.

“I went to try and get a wicket, almost bought a wicket. Obviously, it didn’t work out and that’s when Pakistan actually won the match.”